Individual investors are about 50% more likely to buy a stock that they have held before, as compared to a new stock. 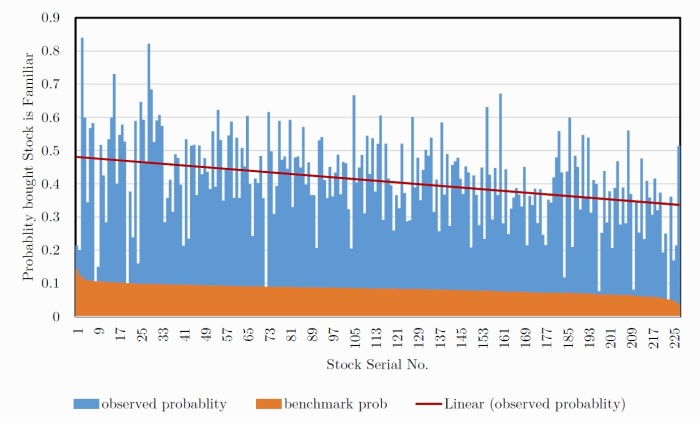 The numbers on the horizontal axis represent one stock each. So stock#1 is the most traded and stock#225 is least traded. The orange plot is thus, as expected, decreasing. The most trader stock is more likely to be held by an investor recently and also has higher probability of being currently bought. For example, Apple (AAPL) is among the most traded stock, so any investor is likely to have held AAPL at least once in the past one year. Also while picking a stock at random, it is statistically more likely that the investor again picks AAPL. This is the benchmark probability and is thus high for AAPL. A similar probability computed for an obscure stock, say XXYZ, will be lower.

The observed probability (in blue) being much higher than the benchmark probability (in orange) implies that individuals have a much stronger affinity for familiar stocks than what would occur mechanically. And this affinity is not just for the more popular highly traded stocks but for obscure less traded XXYYZ stock as well.